We are pleased to announce the return of our annual percussion day at Sandbach School int he Lonsdale Centre on Sunday 9th January 2022. The day will start at 10am with registration from 9:30am. Following the day of masterclasses there will be a short concert from 5pm to showcase the ideas worked on throughout the day. The day compromises of 4 workshops including; Mallet Percussion, Cymbals, Timpani and Drum Kit.

The cost for the day is £10, payable via Go Cardless.

After the success of last year we will also be offering a full roast carvery at lunch time, this will be available at an additional cost of £6.50 for adults and £4.00 for children payable on the day.

Timetable for the day

Led by Royal Birmingham Conservatoire Percussion Students. A hand-on jam session - see what it takes to be a great tuned player

A Masterclass led by Graham Johns, Principal Percussion of the Royal Liverpool Philharmonic

A Masterclass led by Paul Turner, Professor of Timpani at the RNCM

3:00pm - Session 4 - Drum Kit Masterclass (The Musical Approach) - Be a musician and not just a drummer

Informal concert, featuring artists and students from throughout the day.

A firm favourite at many LMT Percussion Days, the Royal Birmingham Conservatoire students appear again to give a high energy interactive workshop and ensemble performance.

The RBC percussion ensemble performs many times each year, playing ground-breaking new repertoire alongside classics from composers like Steve Reich, Iannis Xenakis and John Cage. In recent years they have performed Reich’s Drumming, Mallet Quartet, Pieces of Wood and Music for Mallets. Since 2018 the ensemble has collaborated with the RBC Music Technology and Stage Management departments on a series of concerts at warehouse venue Centrala. These gigs are an opportunity for the ensemble to perform some of the most cutting edge repertoire out there, with a focus on multi-media and immersive performance. Recent performances have included Stockhausen’s iconic Mikrophonie & Zyklus, Anna Meredith Brisk Widow and Reich Pendulum Music.

The RBC students have given many workshops to children all over England including the LMT Percussion Day in Cheshire, Mark Bolderson Foundation Percussion Day in Northumberland, Wells Cathedral School, Chethams School and the Purcell School, working with specialist tutors Owen Gunnell and Sophie Hastings. They can also often be seen working with children in schools across Birmingham and the Midlands, and giving family concerts in local venues. Since 1983 Graham Johns has been Principal Percussion of the Royal Liverpool Philharmonic. Born in New Zealand, he was appointed Principal Timpanist of the Tasmanian Symphony Orchestra at the age of 19, the youngest ever Principal in an Australian orchestra. Graham went on to study timpani and percussion in Amsterdam with Jan Labordus and Jan Pustjens, and was soon booked to play extra with the Royal Concertgebouw Orchestra, his debut unusually being on Harmonica, under Sir Andrew Davis.

Graham continued his studies in the USA at Oberlin Conservatory and at the Tanglewood Music School where he studied with Vic Firth and Frank Epstein.

During his career with the RLPO, Graham has played several concertos and has taught colleges around the UK as well as giving masterclasses around the world.
In 1995 he was chosen as a founding member of the World Orchestra for Peace by Sir George Solti, which plays together every few years for concerts and tours, latterly conducted by Valerie Gergiev. A native of Lancashire Paul began playing the drums aged 11 and spent his formative years as a timpanist percussionist and drummer playing in  various local orchestras ,brass bands and big bands, working mens clubs and indeed any ensemble or group that required him! At age 18 he gained a place Trinity College of Music and whilst in his final year of studies was  appointed into the position of Principal Timpani Bournemouth Symphony  Orchestra, a post he held for over 7 years prior to being appointed into his  current position as Principal Timpanist at the BBC Philharmonic  Orchestra, a post he has held for almost 25 years.

During his time with the  orchestra he has performed, recorded and toured extensively  internationally. He has also appeared as a guest timpanist with countless  orchestras and ensembles including London Symphony Orchestra, BBC  Symphony Orchestra, Halle London Mozart Players and Royal  Philharmonic Orchestra to name but a few and has performed on over 200 commercial recordings to date. Paul is highly committed to helping  nurture the next generation of players, giving private lessons, masterclasses and tuition at conservatoires across the UK and has  recently taken up the post of Professor of Timpani at the RNCM . 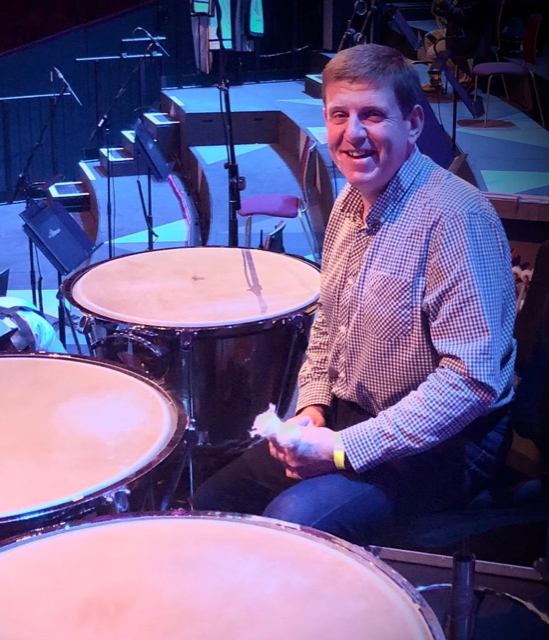